This whitepaper presents a workflow observation performed at the Institute of Pathology at Vivantes Klinikum Neukölln. The impact of the implementation of SMART Automation instruments on the productivity of the laboratory was assessed. It was found that the introduction of SMART Automation led to a significant increase in overall productivity of the lab, with the greatest increase of 372% in the embedding step. In addition, this workflow observation highlighted the potential for a future in which increasing workloads can be dealt with, preparing the lab for tomorrow.

In the recent years, the demand for histopathology services has grown significantly and it continues to grow. The rising cancer cases, increased demand for high-quality results, and increased demand for standardisation have not been in line with the pathology workforce. Therefore, Sakura Finetek designed SMART Automation to automate the laboratory process to enable a continuous flow through the laboratory and to standardise high-quality results. Sakura Finetek conducted a workflow observation in which they measured the rate of productivity at a pathology laboratory both before and after the installation of SMART Automation instruments.

This workflow observation was designed to investigate how SMART Automation affects the productivity of a lab, and to identify the areas affected the most.

The hypothesis of this workflow observation was that implementation of SMART Automation would lead to an overall higher productivity and a more efficient laboratory workflow.

The location of the workflow observation was the Institute of Pathology at Vivantes Klinikum Neukölln, the main location of the Vivantes Hospital Group in Berlin. This institute handles large volumes of complex diagnostic cases, including immunohistochemistry, detection and diagnosis of cancers, and other molecular diagnostic services. Moreover, this institute receives complicated samples from four satellite laboratories for further diagnosis.

The institute had decided to implement SMART Automation for the following reasons:

This whitepaper presents the findings of the workflow observation conducted by Sakura Finetek that observes the productivity before and after the implementation of SMART Automation.

Table 1 shows a complete list of the SMART Automation instruments that were implemented in the laboratory and in operation during the second observation day in August 2018.

The overall number of minutes spent on manual work was totaled up for each station and the output of each station was monitored. To keep the results reliable, the timer was only running when a member of the laboratory staff was occupied with manual work related to each specific station.

The results of the study are shown in Figure 1. Overall, the study found that the implementation of SMART Automation instruments consistently improved the rate of productivity in most areas of lab work, though the rates differed slightly in effectivity between stations. 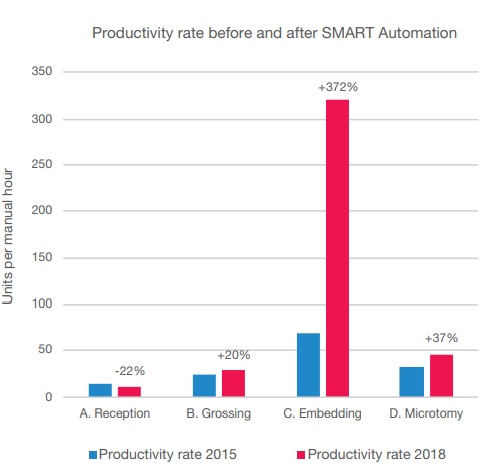 The greatest increase in productivity came from the embedding station (Figure 1C). This station saw a large increase in productivity from 68 cassettes per hour of manual labour to 320 cassettes per hour of manual labour, a 372% increase. This dramatic increase is the effect of the combination of the Tissue-Tek AutoTEC a120 and Tissue-Tek® Paraform® Sectionable Cassette System.

The Tissue-Tek AutoTEC a120 automates the embedding process for all standard cassettes sizes. With the implementation of the Tissue-Tek AutoTEC a120, the laboratory was able to reduce the manual time significantly and thereby freeing up technicians to do more value-added work. The manual time that is assessed at the embedding station after implementation of SMART Automation was merely spent on special sized cassettes.

On top of that, the Tissue-Tek Paraform cassettes enabled tissue to be locked in the correct orientation from the grossing station to the embedding step. This eliminates the manual time of re-opening the cassette and re-orientating the tissue at the embedding step. Despite the extra orientation step at the grossing station with the use of Paraform cassettes, it is not at the expense of the productivity rate in the grossing step. On the contrary, Figure 1B shows an increase in productivity of 20%.

Microtomy also saw a great increase of 37% in productivity after implementation of SMART Automation instruments (Figure 1D). The Tissue-Tek AutoSection was a key factor in the increase of productivity for microtomy. The automated microtome saves time by aligning the block automatically. Automatic aligning of the block was especially time-saving in case of re-sectioning of a block or when additional sections were required. Moreover, the AutoSection has helped to reduce repetitive strain injuries (RSI) caused by traditional, manual microtomy. Furthermore, it was reported by the technicians of the laboratory that the AutoSection contributed to the standardisation of slide preparation. The slides produced were all coverslipped by the Tissue-Tek Film coverslipper and were used for digital scanning.

Figure 1A shows a small decrease in cases per hour at the reception. However, it was concluded that this was due to a small change in the amount of administrative tasks that needed to be carried out. The time gained in the other stations outweighs this decrease in productivity at the reception significantly.

The laboratory continued to increase the number of cassettes processed with the Tissue-Tek Xpress x120. As the laboratory continues to use two lines for cassette processing, continuous processing and conventional processing, the laboratory has decided to install a second Tissue-Tek AutoTEC a120 to complement with the lines and to further increase cassette throughput. At the moment of the post-study report, there were also plans for a third Tissue-Tek AutoSection to be installed. All of these additions have further improved workflow and optimised the shift towards digital pathology, as reported by the pathology department.

The results of the workflow observation proved the hypothesis: the implementation of SMART Automation creates a more efficient laboratory workflow and leads to an overall higher productivity. In addition to proving this hypothesis, the workflow observation highlighted the potential for a future in which increasing workloads can be dealt with, without the need for hiring staff from an already limited pool of potential employees. This is especially important for laboratories that find it difficult to retain a satisfactory number of staff. 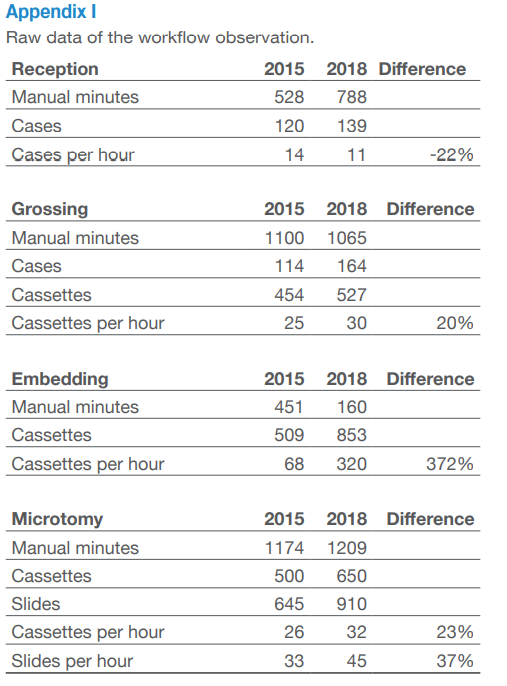 *Inconsistencies of volume throughout the workflow are caused by overnight processing of (fatty) tissue and overnight fixation among other things.

Sakura Finetek aids the patient journey in the field of histopathology

To contribute to the patient journey and the effectiveness of histopathology laboratories, we provide pathology professionals with instruments and solutions to help improve their workflow in the lab.

Discover why digital pathology is on the rise and how important the pre-analytics phase is in achieving its full potential in your lab.

One million cassettes at Pathologie Friesland

One million processed cassettes with the help of the Tissue-Tek Xpress x120: “It drastically improved our workflow and productivity”

Benefits of Digital Pathology and the importance of slide preparation.

Modernising pathology - the importance of pre-analytics in going digital

European Society of Digital and Integrative Pathology (ESDIP) held their 3rd workshop The Integrative Dimension of Pathology on November 24th, 2021. We have had the opportunity to invite Dr Juan Antonio Retamero, pathologist and consultant in digital pathology, to give a talk about modernising pathology and the importance of preanalytics in going digital.

Are you ready for digital pathology?

Within the field of pathology there are several new technologies becoming more significant, one of which is Digital Pathology. The transition to digital pathology requires preparation of your pre-analytical processes. This article dives into the benefits of good preparation.